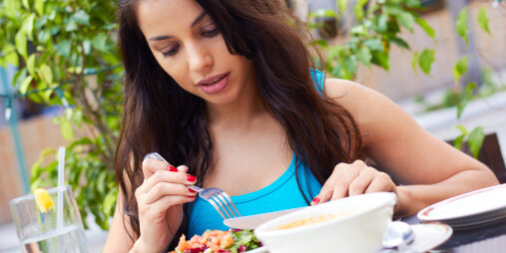 What Is Compulsive Overeating?

Scientists believe that genetic mutations and hormonal irregularities can play a role in binge eating. Binge eating has also been linked to numerous psychological disorders, such as anxiety and depression. Even though many people eat large amounts of food to cope with their depression, binge eating can actually make depression worse.

Society puts a lot of pressure on people to look a certain way, which can trigger emotional eating. People who receive negative comments about their bodies are more prone to binge eating. Furthermore, people who have undergone a traumatic experience, such as physical or sexual abuse are more likely to binge eat.

It’s important to note that binge eating disorder is different from bulimia. People who have binge eating disorder won’t purge to get rid of what they have eaten. However, bulimics will use various methods to get rid of the food that they’ve eaten. This can include things such as using diuretics, throwing up, exercising strenuously or going for long periods of time without eating.

Most people will overeat occasionally. However, compulsive overeating is different from occasionally overeating. People who frequently binge-eat have lost control of their eating habits. They may eat even when they aren’t hungry.

Frequent binge eaters may also eat until they experience discomfort. People who compulsively overeat may feel embarrassed about their condition, so they may eat alone. Additionally, people with a compulsive eating disorder will typically overeat for at least two days out of the week.

It’s very important for people who have binge eating disorder to seek help for their condition. There are a number of health problems that can result from compulsive overeating. Some of those conditions include obesity, type 2 diabetes, heart disease, depression, anxiety and gastrointestinal problems.

If you haven’t been able to overcome a compulsive eating disorder through traditional methods, then you need an alternative solution. Try to get help as soon as possible. It’s important for you to discuss your problem with people who can help, preferably people who have had a compulsive overeating disorder and overcame it. Someone “in the know” like Roy Nelson can help you beat this terrible affliction.